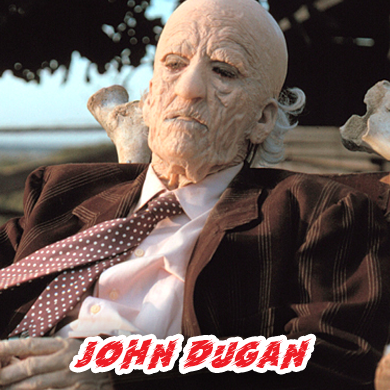 John Dugan was born in Brazil, Indiana. He attended the Goodman School of Drama at the Art Institute of Chicago. During his time in Chicago, he performed in several theatrical productions. While he was in Chicago, screenwriter Kim Henkle approached him to portray an old patriarch of a cannibalistic family, and he enthusiastically accepted the offer. He was cast as Grandpa in “The Texas Chain Saw Massacre”, a film directed by Tobe Hooper. He was 20 years old at the time of filming, playing a 113-year old man whose family lured young people to their Texas homestead, where they were killed and eaten. The low-budget film has become a classic in the horror genre, spawning several sequels and a remake.

After filming, John returned to theater acting in Chicago, and eventually moved to Los Angeles. He took several years off to focus on his family and raising his daughter.

Thankfully to his fans, John’s hiatus was short lived and he began filming again. True to his roots, he did a cameo appearance in “Texas Chainsaw Massacre:The Next Generation”. He has appeared in several independent horror films, including Monstrosity”, “The Butcher Boys” and in “The Hospital”. He also appeared in the film rendition of Stephen King’s The Boogeyman. And almost forty years later, he appeared in the iconic movie “Texas Chainsaw 3D” (2013) as Grandpa Sawyer.

John Dugan will be appearing both days.