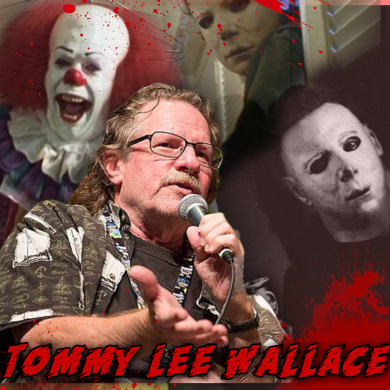 Tommy Lee Wallace is best known to fans as the creator of the iconic Michael Myers mask in the original Halloween, and he even donned the Myers mask for the closet scene where Michael is attacking Laurie. He also has quite the resume as a film producer, director, editor, and screenwriter.

Tommy originally created the mask by purchasing a William Shatner mask, which he then doctored by cutting the eye holes bigger, yanked off the sideburns, darkened the hair and spray-painted the whole thing dead white.

Tommy is also known for directing horror classics such as Halloween III: Season of the Witch, the 1990 mini-series adaption IT and Fright Night Part 2.

He is a long-time friend and collaborator of director John Carpenter, receiving his first credit as art director on Carpenter’s directorial debut Dark Star. Along with Charles Bornstein, he edited both the original Halloween and the Fog.

Tommy Lee Wallace will be appearing both days.