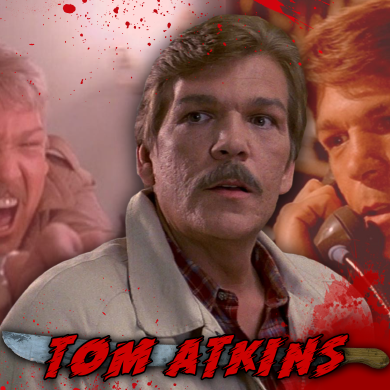 Halloween III: Season of the Witch

Tom Atkins is best known for his work within the horror and science fiction genres. He starred in two films directed by John Carpenter: the 1980 ghost story The Fog and the 1981 science fiction thriller Escape From New York. His next role (this time a leading role) was the third installment of the Halloween franchise, the Carpenter-produced Halloween III: Season of the Witch.

He completed further work with George A. Romero, appearing in three of the director’s projects: the anthology Creepshow; the anthology Two Evil Eyes; and Bruiser.

He portrayed Detective Ray Cameron in the 1986 cult horror film Night of the Creeps, and also had a lead role in Maniac Cop.

Atkins has continued to act in both the thriller and police procedural genre and is well known to movie goers for his roles in Lethal Weapon, Striking Distance, and both the film and tv versions of the Rockford Files.

Recently he had supporting roles in the remake My Bloody Valentine 3D and Drive Angry.

Tom Atkins will be appearing both days.