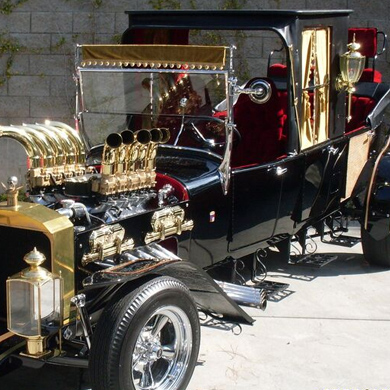 The Munster Koach is the family car that was used in the classic television series, The Munsters.

The show’s producers contracted George Barris to provide the Koach. Barris paid Tom Daniel to design the car, and had it built at Barris Kustoms, first by Tex Smith, but finished by Dick Dean, his shop foreman at the time. The Munster Koach appeared in over twenty episodes throughout the series’ two-year run, and was also seen in Munster, Go Home!, using different wheels. Tom Daniel’s original drawing of the Munster Koach had it supercharged with a hood scoop and thin, round disc lights. George Barris chose the ten-carburetor setup with the ten air horns and lantern lights.

This fan built replica is an amazingly detailed car that you must see to believe. Don’t miss your chance to get a picture with this beautiful, legendary television vehicle!