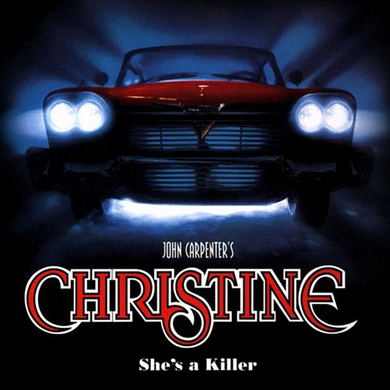 In 1957, in Detroit, a red Plymouth Fury is built and is the cause of two accidents, one of them fatal, still in the assembly line. Twenty-one years later, the outcast and bullied nerd Arnold “Arnie” Cunningham is getting a ride with his best and only friend Dennis Guilder and he sees the wrecked car for sale in a garden. Arnie immediately falls in love with the car. The car was given the name Christine by it’s first owner. He brings the car to a repair shop of the despicable Will Darnell and works hard to restore the classic car. While he works in the restoration, he changes his personality to a cocky teenager and he dates the most beautiful girl in the high-school, Leigh Cabot. Soon Arnie becomes selfish and jealous of the supernatural Christine that kills everyone that is a threat to them.

Although the car in the film is identified as a 1958 Plymouth Fury—and in 1983 radio ads promoting the film, voiceover artists announced, “she’s a ’57 Fury”—two other Plymouth models, the Belvedere and the Savoy, were also used to portray the malevolent automobile onscreen. John Carpenter placed ads throughout Southern California searching for models of the car, and was able to purchase twenty-four of them in various states of disrepair, which were used to build a total of seventeen models of the Fury.

Total production for the 1958 Plymouth Fury was only 5,303, and they were difficult to find and expensive to buy at the time. In addition, the real-life Furys only came in one color, “Buckskin Beige”, seen on the other Furys on the assembly line during the initial scenes of the movie. The Fury also got anodized gold trim on the body and Fury script on the rear fender. In order to bypass the problem of obtaining the rare trim, the cars featured the more common Belvedere “Dartline” trim. Several vehicles were destroyed during filming, but most of the cars were Savoy and Belvedere models dressed to look like the Fury. At least one ’57 Savoy was used, its front end modified to look like a ’58.

Originally, Carpenter had not planned to film the car’s regeneration scenes, but decided after the shoot had finished to include them. The shots of the car regenerating itself were shot in post-production and done using hydraulics.