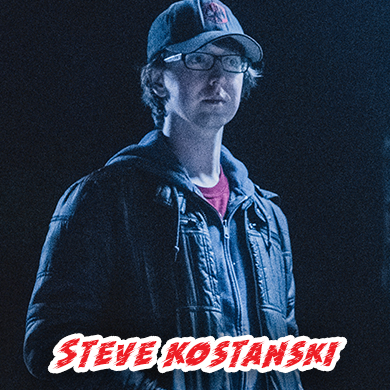 Since 2004, STEVEN KOSTANSKI has ricocheted between low-budget horror and blockbuster sci-fi as both a prolific filmmaker and prosthetic makeup effects artist. Cutting his teeth in FX at the age of 17 on the horror film TAMARA, where he worked under famed monster-maker Doug Morrow, Steve has since worked on such projects as RESIDENT EVIL: RETRIBUTION (for Paul Jones FX Studio) PACIFIC RIM (for Mindwarp FX) and Crimson Peak (for DDT) while also steadily writing and directing numerous short films and features that have played festivals worldwide. His debut feature MANBORG (2011) was produced with the filmmaker collective ASTRON-6, and earned him an invitation to participate in the popular anthology series THE ABCs OF DEATH in 2014, where his segment W IS FOR WISH drew much acclaim. In 2016, he and fellow Astron-6 filmmaker Jeremy Gillespie co-wrote and co-directed the break-out indie horror hit THE VOID on the heels of a wildly successful crowdfunding campaign. Kostanski was then entrusted by SyFy and Lionsgate with reigniting the iconic LEPRECHAUN franchise (in collaboration with MastersFX), and many fans and critics have hailed his sequel LEPRECHAUN RETURNS (2018) as among the best in the series since the 1993 original. He continued his working relationship with SyFy and MastersFX in 2020 when he directed 4 episodes of the DAY OF THE DEAD series. His latest film, PG: PSYCHO GOREMAN (2020), is a return to his indie roots and a love letter to the sci-fi, horror and action films of his childhood. It is now available on Shudder.