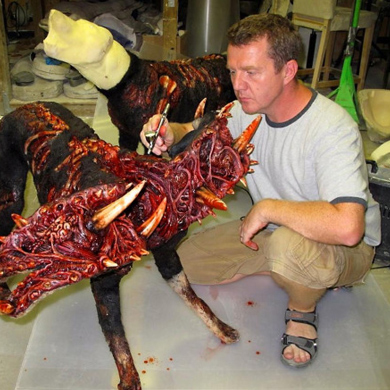 Paul Jones is an F/X guru and one of the most recognized Special Effects Make-Up artists in Canada. Paul has worked on over 50 films, including the RESIDENT EVIL series, SILENT HILL 1&2, HELLRAISER 2&3, THE THING remake, Nightbreed, Bride of Chucky, Wrong Turn, Clive Barker’s The Plague, Skinwalkers, Goon: Last of the Enforcers, Hob with a Shotgun, Nurse 3D, Kick-Ass, Shoot ‘Em Up and many, many more.

Additionally, Paul has worked on many television shows, including the recent hits Man Seeking Woman, Orphan Black, Beauty and the Beast, Defiance, Shadowhunters, Reign and the soon-to-debut Star Trek: Discovery.

Paul’s showcase will feature over 500 square feet of many of his famous screen used prosthetic props and puppets. In addition to the showcase, Paul will be hosting a special effects seminar, sharing secrets with fans on how he creates some of his many amazing effects.

Paul Jones will be appearing at Frightmare in the Falls both days.