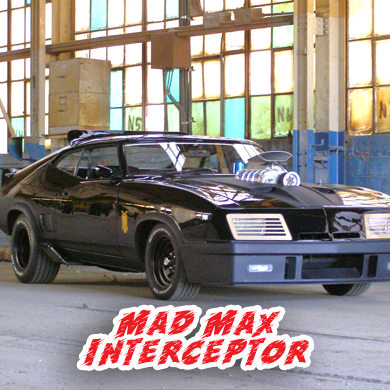 The Mad Max Interceptor, also know as The Pursuit Special and referred to as the V8 Interceptor, is the iconic black police interceptor used by the Main Force Patrol in the Mad Max film series. The vehicle appears in the first two films, was absent from the third movie (it was destroyed in Mad Max 2), and was re-introduced for the newest installment in the series, Mad Max: Fury Road.

The famous Pursuit Special is a modified 1973 Ford Falcon XB GT. Within this storyline, Max Rockatansky is offered the black Pursuit Special, referred to as a V8 Interceptor, as an incentive to stay on the force as their top pursuit man after he reveals his desire to quit. Although Max turns the offer down, he later uses the black car to exact his revenge on an outlaw motorcycle gang who killed his wife and child.

Get your picture with this amazing car!