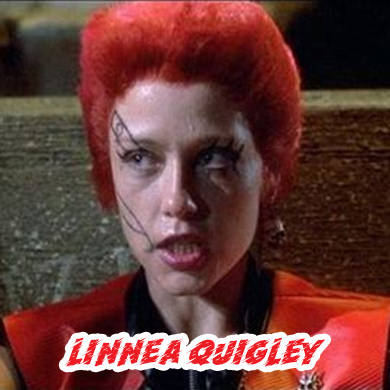 Return of the Living Dead

Barbara Linnea Quigley was born in Davenport, Iowa, on May 27, 1958 to Heath and Dorothy Quigley. Her Mother was a housewife and her Father a noted Chiropractor and psychologist. After moving with her family to Los Angeles in the late 1970s, the short, petite Linnea began working at a Jack Lalanne Spa. There she was encouraged to try modeling and acting. She soon began getting small parts in commercials and B-movies, such as “Stone Cold Dead” (1979) and “Wheeler” (1975). Her breakout role was in “The Return of the Living Dead” (1985), which has gone on to become a cult classic, and established her firmly as “Queen of the Bs”. Her reign was supreme in the late 1980s with such films as “Sorority Babes in the Slimeball Bowl-O-Rama” (1988), “Night of the Demons (1988), and “Hollywood Chainsaw Hookers” (1988) In 2001 Linnea moved to Florida to be closer to her ailing parents who had settled there after her father retired. As of this writing she resides in south Florida with her beloved dogs. She is a devoted animal rights advocate, and also leads a strict Vegan lifestyle. Linnea continues to appear in, and produce films. She also appears at Horror Conventions around the globe, where she is a fan favorite. She has written two books about her life in the B-movie industry, “Bio & Chainsaw,” in 1992 and “I’m Screaming as Fast as I Can” in 1995. After more than 35 years and more than 125 films, Linnea Quigley is still “America’s Scream Queen”.

Linnea will be appearing both days at Frightmare In The Falls 2021.