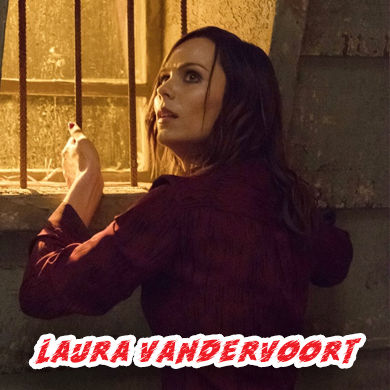 Laura Vandervoort is a versatile actress, producer and writer who not only crosses over genres, but also changes from character to character flawlessly embracing the essence of every role she plays. Laura has built an international fan from her extensive resume and has been consistently working as an actress since she was thirteen years old.

She first began her career in background work on Canadian commercials and TV landing her first speaking role at the age of thirteen for the children’s series “Goosebumps” and then “Are You Afraid of the Dark?” Laura went on to Disney movies and while attending York University under the concentration of Psychology and English, Laura landed the lead on the CTV TV series ‘Instant Star,’ a popular series that ran for four seasons.

Laura has since continued on her superhero path voicing “Mary Jane” in the new Spiderman video game and voicing three episodes of ‘Family Guy.’ Laura has guest starred on several series including ‘Haven,’ ‘Private Eyes’ and ‘White Collar’ amongst many others. Both feature film and indie film, she is inspired to work on roles that challenge her.

Laura’s lead role of ‘Elena’ for the sci fi-action series ‘Bitten’ for Syfy and Space. The series ran for three hugely successful seasons. Additionally, Laura appeared as a recurring villain on CBS’ ‘Supergirl.’ Laura went on to join the “Saw” franchise as their lead actor in the new installment “Jigsaw.” “Jigsaw” was number one in theaters during its release. Soon after, Laura helped produce and starred in a short film titled ‘Unspeakable’ for the American Film Institute, for which has received many nominations and wins from festivals. Recently Laura won Best Actress for her work in ‘Unspeakable’ at the Queen Palm Film Festival. Laura went on to her next series ‘Ice’ starring Jeremy Sisto filming in South Africa. Laura signed on as not only lead actress but Consulting Producer for the feature film ‘Rabid’ which premieres 2019. A day after ‘Rabid’ wrapped, Laura took on a new role and new series for Netflix airing 2019 titled ‘V Wars’ starring Ian Somerhalder.

Her newest project is none other than her passion project, ‘Age Of Dysphoria.’ Laura developed, executive produced and starred in this film alongside Canadian legend, Mr. Gordon Pinsent. The film was directed by Jessica Petelle, who is also an executive producer.

Following several film festival wins for both ‘Age Of Dysphoria’ and Laura as Best Actress, Laura starred as the lead of the movie ‘A Christmas Exchange,’ alongside actor Rainbow Sun Francks. Followed by several appearances in feature films including, ‘See For Me’ Laura worked alongside Elisabeth Moss for an episode of the hit Hulu series ‘Handmaid’s Tale,’ during their 4th season. During production of ‘Handmaid’s Tale,’ Laura was in development on her directorial debut for ‘My Soul To Take,’ a short film she wrote and will also executive produce.

Laura will be appearing both days at Frightmare In the Falls 2021.