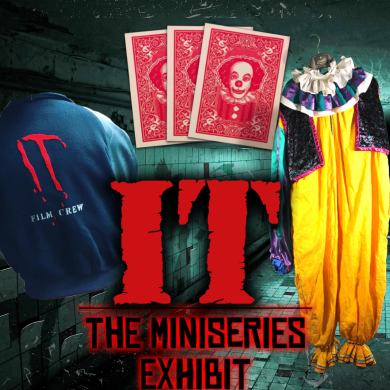 IT: the Miniseries ExhibIT

Collector John Campopiano will be bringing his special collection of IT memorabilia to Canada for the first time ever!

John has been a super fan of Stephen King’s IT since the mid-1990s. Whether it was saving up his allowance in order to have a custom “IT” baseball cap made or repurposing old shoeboxes into a homemade diorama of “The Barrens” set, John’s always been passionate about the story, characters, and that infamous clown. Around that same time he also began collecting copies of the miniseries on home video and, as of 2018, estimates he has over 30 copies from 14 different countries and representing 7 different consumer formats. More recently, John has added amazing pieces to his collection, including production materials, rare memorabilia and prints, and the holy grail of the collection – a screen used Pennywise costume worn by Tim Curry.

In 2017, he began collaborating with the UK-based Dead Mouse Productions on a feature length documentary about the miniseries titled, Pennywise: The Story of IT. John works as an audiovisual archivist in public media and enjoys watching and writing about cult and horror films in his free time.