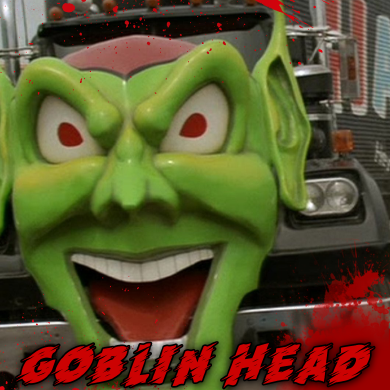 In 1987, Tim Shockey purchased the Green Goblin screen used prop from the Stephen King film Maximum Overdrive in Wilmington, North Carolina. Tim brought the goblin head back to southern Ohio where it sat on display in his video store (Uncle Jim’s Videoland). After Tim sold the video store, the head was put in his back yard where it sat for many years. His wife didn’t like it, and tried giving it away…she even ran into it with a riding mower (by accident) and knocked off the goblin’s left ear.

After that happened, Tim moved the head into his garage where it was finally out of the awful weather and away from riding mowers.

In 2011, Tim started working evenings and weekends restoring the prop. He worked many many hours building and sanding before finally painting the prop by March 16, 2013! The following weekend, the goblin head attended it’s first horror con at HorrorHound Weekend in Cincinnati, Ohio. After that weekend, Tim bought a new trailer to transport the goblin around in, and attended over 10 shows that year! They have been to shows across the whole east coast from Maine to Florida and as far west as Chicago, IL. They also have attended 1 show in Canada as of now, with Frightmare in the Falls being the second ever!