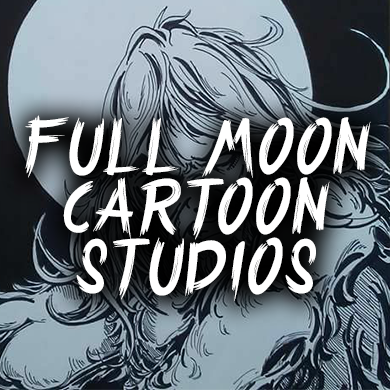 Full Moon Cartoon Studios is a Lexington Cartoon based company with an emphasis on the Horror Genre. Professional Cartoonist Brian Ingermann,  has three IMDB film credits for storyboards and Art Direction created for Stephen King’s: The Man Who Loved Flowers and Something in the Shadows for 5 After 5 Productions (an Indiana based film company,) and the upcoming Paranormal Horror film Rosa Leigh (See  the you tube Trailers,) from Creepy Attic Productions and Director Christopher Maggard and Starring from Season 4 of The Walking Dead Santiago Cirilo and his co-star leading lady from Lexington, KY, the amazing Jessica Paige York. Brian is also under contract with Bad Anger Pictures (Dan Yeager and Ron Scott’s film company) to do storyboards with them when called upon to do so. Please reference Brian’s page on IMDB for a full bio, background and lists of awards.
Brian has been on the Horror and Pop Con Circuit since 2013 and due to his past career, after serving in the United States Air Force, he managed Movie Theaters and Drive In Cinemas, where he showed many of the classic horror films that he now attends conventions with their major actors and actresses, directors and producers, that once starred in or made those films. He has attended Days of the Dead (Chicago & Indianapolis,) Scare-A-Con (Verona NY and Boston MASS,) Motor City Nightmares (Detroit MI,) The Living Dead Weekend (Evans City, PA,) The 40th Anniversary Living Dead Weekend of Dawn of the Dead (Monroeville Mall Pittsburgh, PA,) The Scarefest (Lexington KY,) The Dark History and Horror Con (Champagne, IL,) and will be appearing at the Full Moon Tattoo and Horror Con this October 19-21 in Nashville TN (with C.J. Graham and Steve Dash, who will of course be at Frightmare at the Falls you’re weekend.)
Brian has created specialized illustrations for: PJ Soles, Sid Haig, William Forsythe, Meg Foster, Kane Hodder, Robert Mukes, Steve Dash, Tony Moran, Fairuza Balk, Dee Wallace, Michael Berryman, Alice Krieg, R.A. Mihailoff, Cassandra Peterson, Tobin Bell, Sean Whalen, Felissa Rose, Tiffany Stephis, Adam Green, Derek Mears, Bill Mosley, Eugene Clark and more. For con goers, he also cartoons them into his specialized Zombie, Slasher, Alien, Ghostbuster or Creature art templates at the shows he attends. This is a great interactive booth experience for those attending the con! He is also the Creator and Writer of the new Horror Comic Book Supernatural Slashers, and several novels including Madson Crow: Vampire Killer and The Underworld of Carmine Giovanni.
© Frightmare In The Falls 2021