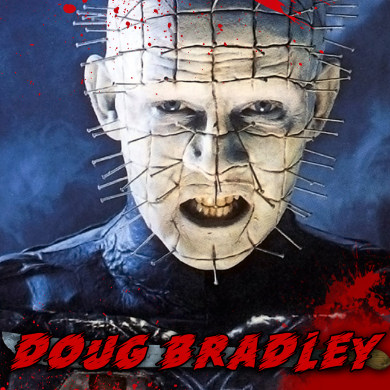 Bradley is best known for playing the role of Pinhead, the Lead Cenobite in the first eight Hellraiser films, as well as his human form, Captain Elliot Spencer.

He is one of only six actors to play the same horror character at least six consecutive times, the others being Christopher Lee (Count Dracula), Robert Englund (Freddy Krueger), Warwick Davis (the Leprechaun), Brad Dourif (Chucky) and Tobin Bell (Jigsaw).

Due to his eventual skill at application and removal of the Pinhead appliances and costume, he has been credited in some of the films as an assistant make-up artist named Bill Bradley, using his middle name.

Bradley also starred in the horror films Nightbreed, Pumpkinhead: Ashes to Ashes, and once again returned to Clive Barker’s cinematic universe by way of a featured appearance in Book of Blood. He had a small guest star appearance in the 2008 black comic horror The Cottage, starred in the Anglo-Spanish horror film Exorcismus, and joined the Nazi zombie horror The 4th Reich in March 2010.

Bradley voiced the Sith Emperor for the mmorpg Star Wars: The Old Republic, based within the Star Wars universe.

Doug Bradley will be appearing both days.