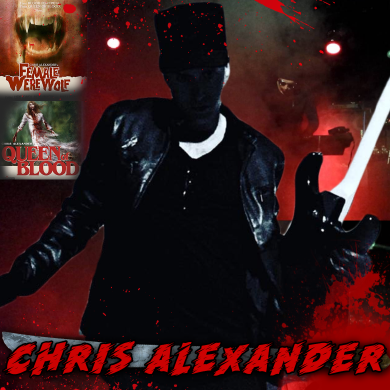 Chris is an internationally published film critic, writer, editor, music composer and filmmaker. From 2009 – 2015 he served as the editor-in-chief of the American horror film magazine FANGORIA and its sister periodical GOREZONE, is the editor and co-founder of cult film magazine DELIRIUM and the co-founder of FANTASM Media Group. Alexander has also edited and published several licensed magazines for the iconic rock band KISS. As a filmmaker he is the writer, director and composer of the avant garde horror films BLOOD FOR IRINA, QUEEN OF BLOOD (starring Skinny Puppy legend Nivek Ogre), BLOOD DYNASTY, FEMALE WEREWOLF, SPACE VAMPIRE and the upcoming BLUE EYES. As a musician he has released the albums MUSIC FOR MURDER (Giallo Disco Records), BLUE EYES OF THE BROKEN DOLL (Future City Records) and THEY DRINK YOUR BLOOD (Future City Records). More on Alexander’s film and music work can be found at www.ChrisAlexanderOnline.com and his film writing at www.AlexanderOnFilm.com.