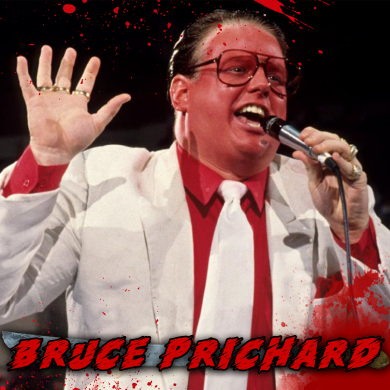 Bruce Prichard is best known as a manager and producer for WWE.

As a manager for the promotion, Prichard performed Brother Love and served as the original manager of The Undertaker. During Prichard’s run as Brother Love, he hosted his own segment, The Brother Love Show where he would usually support the heel wrestlers.

After leaving WWE, Prichard was the Senior Vice President of Programming and Talent Relations for TNA (now Impact Wrestling).

In August 2016, Prichard and co-host Conrad Thompson began the internet podcast Something to Wrestle with Bruce Prichard. Prichard and Thompson discuss a wide variety of subjects from Prichard’s time with the WWF/WWE and his time in TNA and the GWF have been topics as well. The show has become a major success and wildly popular amongst the professional wrestling community, as the show has sold endless merchandise and sold out multiple live shows per year. A WWE Network exclusive version of the show, called Something Else to Wrestle with Bruce Prichard, debuted on April 18, 2018.

Bruce Prichard will be appearing Saturday only.