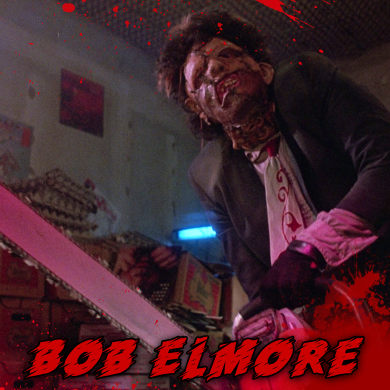 Bob Elmore has been a Hollywood stuntman since 1985 and is most known as Leatherface in Texas Chainsaw Massacre Part 2.

Bob got his start in the late 70s, working at Knott’s Berry Farm, doing chainsaw stunts in a Wild West show. After doing that for several years, Bob looked into getting into the real stunt business. He soon got into a program at LA City College and began getting paid stunt jobs and was able to earn a living doing just that.

When Bob was asked to do stunts on Texas Chainsaw Massacre 2, he had no idea what to expect, as he hadn’t even seen the original film.

It was 110° in Texas with 100% humidity working in an underground tunnel that was 160°. After shooting his stunt scenes, Bob had taken off his Leatherface costume and was about to leave when he was called back to the set. Bob went back wondering what was going on, and he was informed that Bill Johnson (credited for the role of Leatherface) couldn’t lift the chainsaw up over his head. It was the biggest chainsaw on the market at that time and weighed about 75 pounds. The crew had tried to make a lighter chainsaw, but it didn’t work out, so they had to use a real chainsaw with a dulled blade. Bob ended up receiving a stunt contract and an acting contract for the movie.

Although Bob remained credited only as Bill’s stunt double, a large portion of what you see of Leatherface in Texas Chainsaw Massacre Part 2 is actually Bob Elmore.

Bob Elmore will be appearing both days.