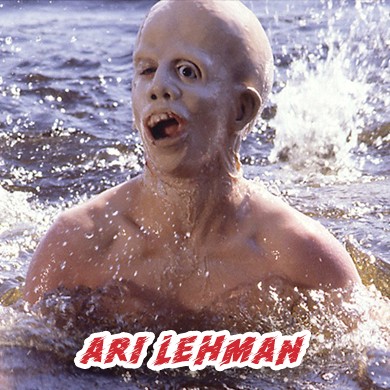 Ari Lehman is the actor/singer who has the unique honor of having played the role of the First Jason Voorhees in the Paramount Classic Horror Film “Friday the 13th” (1980). The original “Boy In The Lake” himself, Ari played a crucial role in the film’s famous final scene, in which he suddenly emerges from the icy waters of Crystal Lake. Working with Special Effects Master Tom Savini at an early age gave Ari a deep appreciation for the Horror Greats including Lon Chaney, Bela Lugosi, Boris Karloff and Vincent Price. Since 2009, Ari records and tours the US and Europe with his Horror Rock Band, First Jason, based in Chicago.

A native New Yorker, Ari grew up in Westport, CT, where he trained in Classical music and Jazz Piano. Recognized at an early age for his musical abilities, Ari was presented with an All-State Award for Excellence in Jazz Piano and a generous scholarship to Berklee School of Music by the famous jazz educator, Dr. Billy Taylor.

Also actively engaged in performance and theatre, Ari heard about an audition being held in Westport, for a new movie, “Manny’s Orphan’s”, about a group of inner-city orphans who play Soccer, directed by Sean S. Cunnngham. Ari snuck into the audition and landed the 80-line role of “Roger”, a pre-pubescent comic character who is obsessed with girls. This role led to Ari getting the call to play Jason Voorhees in “Friday the 13th” from Sean S. Cunningham himself, who famously asked him “Can you swim?”, Ari replied “Yes!” and the rest is Horror History.

After the release of “Friday the 13th”, Ari returned to New York City where he studied Jazz Piano in its breeding ground with the great Joanne Brackeen and enrolled in NYU studying Big Band Orchestration and Jazz Piano with recognized Masters Jim McNeely and Vladmir Shafranov. Interestingly, Ari’s career led him to become a prominent touring Keyboardist for some of the top names in Reggae and African music, with whom he toured throughout the US, Europe and West Africa, working for Bob Marley’s own Tuff Gong Records and Interscope Records.

As a seasoned recording artist and professional musician, Ari went on to receive acclaim with his own World Rock and Reggae band, when, upon moving to Chicago in late 2002, he was contacted by Horror fans who eagerly invited him to attend an East Coast Horror Convention. In response to their enthusiasm, Ari became a regular on the Horror Convention Circuit, and immediately saw a great opportunity to give Jason Voorhees a musical voice on the Punk and Metal scene. Ari proceeded to draw upon his 20 years’ experience as a professional musician and recording artist and created First Jason specifically for Horror Fans, especially the fans of Jason Voorhees and “Friday the 13th”.

First Jason has performed in Punk/Metal clubs, Film Festivals, and Horror Conventions throughout the United States. The engaging showmanship and superior musicianship have consistently received enthusiastic response and have developed a strong following.

First Jason has performed at Horrorhound Weekend, Fangoria Weekend of Horrors, Rock and Shock, Days of the Dead, and Flashback Weekend Horror Conventions, as well as The Milwaukee Metal Massacre, Savagefest, The Whisky A Go-Go, and many of the top Punk/Metal venues throughout the US. First Jason has performed concerts in Spain, France and Germany and at The Fantasy Horror Awards in Orvieto, Italy.

Ari has also composed, performed and recorded a number of soundtracks for independent films, including Alexia Anastasio’s critically acclaimed all-female “Salome”, and Vamp Films “Vampira the Movie” which received the Rondo Hatton Classic Horror Award for the Best Independent Film of 2007.

First Jason is signed to Thc Music and released “Jason Is Watching” in 2009.

Ari Lehman will appearing at Frightmare In The Falls both days.