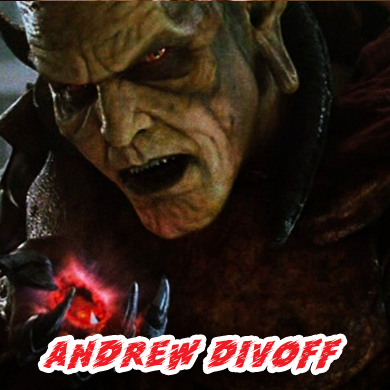 Andrew Daniel Divoff is a Russian film, television actor and stuntman, best known for playing the evil Djinn in the first two Wishmaster films and the villains Cherry Ganz in Another 48 Hrs., Ernesto Mendoza in A Low Down Dirty Shame, Boris Bazylev in Air Force One, Ivan Sarnoff in CSI: Miami and Mikhail Bakunin in Lost. He was born on July 2, 1955 in San Tomé, Venezuela. His father is Russian and his mother is Spanish. He lived five years in Vilassar de Mar (Spain), between 1973 and 1977, feeling himself to be Catalan too. He lives in the United States. Divoff can speak eight languages: English, Spanish, Italian, French, German, Catalan, Portuguese, Swedish and Russian. He used to speak Romanian but forgot the language when he had no one with whom to speak it. He also acted in The Hunt for Red October, Air Force One and Toy Soldiers. Before fame, he was born in Venezuela and lived in Spain for five years. He typically plays villains, especially the leaders of drug cartels, in his films.

Divoff has played many villains in film and on television, usually drug cartel leaders, and is best known for having played the nefarious Djinn in the first two films of the Wishmaster series. His other films include Another 48 Hrs., The Hunt for Red October, A Low Down Dirty Shame, Air Force One and Toy Soldiers.

Divoff’s television guest appearances include The A-Team, JAG and Highlander: The Series.

Divoff had a recurring role on Lost as Mikhail Bakunin, a Russian member of the Others who lived in the Flame station of the DHARMA Initiative. He appeared in “The Cost of Living”, and later in “Enter 77” and “Par Avion”. He later appeared, in flashbacks, in “One of Us,” and reappeared in the episodes “D.O.C.”, “The Man Behind the Curtain”, “Through the Looking Glass” and “The Package”.

Divoff’s latest work was his recurring role as Ivan Sarnoff on CSI: Miami Season 7 (2008-2009). Ivan Sarnoff was a Russian Mobster leader who owned an MMA fighting studio in S07E04 Raging Cannibal. Ivan also ran a horse race betting scam in S07E13 And They’re Offed. Then Ivan targets the CSI team in S07E19 Target Specific. In the last episode of the season, Ivan escapes an assassination attempt by the Russian mob in S07E25 Seeing Red. He acted alongside Harrison Ford in Air Force One.

He was married to Russian actress Raissa Danilova in 1992 but they later divorced in 1998 and was once engaged to Russian model and horror writer Marina Drujko.

A long time resident of California, living in the San Bernadino mountains, Andrew Divoff’s rustic home is hub for his international travels and diverse array of work. Venezuela born of Russian/Irish descent Divoff is an alumnus of Georgetown University, where he honed his skills in the study of languages, the result seeing him speak eight languages fluently. Andrew is a S.A.G actor and film producer with more than a hundred movies (including ‘Toy Soliders’, ‘Another 48 Hours’, ‘Air Force One’, and ‘You Can’t Kill The Bogeyman’) and television (including ‘Lost’, ‘CSI’, and ‘Twilight Zone’) episodes to his credit. His personal and business ties stretch from Washington D.C. to Hollywood and around the world. He has a driving passion for environmental issues, and has used his celebrity status, putting purpose ahead of profit, for several environmental causes. Andrew is a founder of Verdant Resource, Inc., a flexible purpose corporation dedicated to location, retrieval and provision of resources found throughout planet Earth, and promoting their use in a sustainable way of life employing verdant methods. He is also a partner in a private water utility, Alpine Village Water Company, LLC in Pinyon, California.

People acknowledged Andrew Divoff and his work from The WishMaster series, though other fans may have noticed him before in movies like Oblivion (1994) and Toy Soldiers (1991). Almost every movie you see Andrew in he always plays the bad guy, which is what we love best about him. A very shy boy when he was younger, Andrew always had the sense of humor no one else could understand. Born in San Tome, Venezuela Andrew Divoff currently resides in Los Angeles. First audition for Andrew was over a pay phone speaking Russian. Andrew has both a high school and college degree.

Andrew Divoff will be at Frightmare In The Falls both Saturday & Sunday.