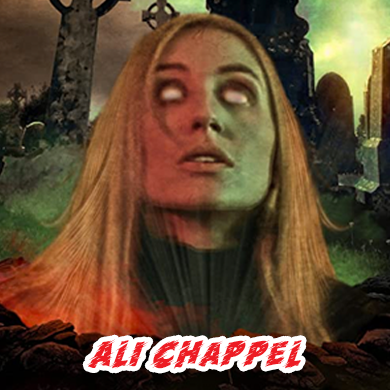 Necropolis: Legion
Canadian-born actor, model, writer and producer Ali Chappell is a classically trained artist making a name for herself across multiple mediums, all over the world.  In feature films, she has starred as “Eva” the lead villain in iconic producer Charles Band’s 2019’s horror drama NECROPOLIS: LEGION and “The Woman In Black/Sasha” in Charles Band’s upcoming film IT KNOWS YOUR ALONE. She played an alien goddess in the award-winning 2020 experimental dark fantasy film SPACE VAMPIRE and a blade-wielding murderer in the upcoming psychological thriller GIRL WITH A STRAIGHT RAZOR. Ali has recently had her directorial debut with her short film VERIFIED.
Ali will be appearing in her horrific costume featured in Necropolis: Legion both days!
© Frightmare In The Falls 2021