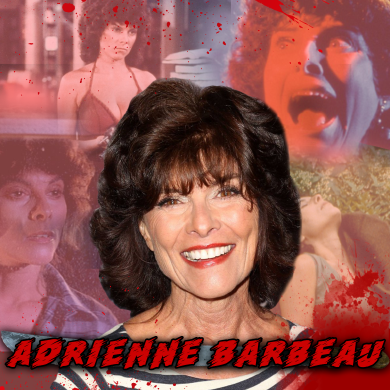 Horror fans know iconic scream queen Adrienne Barbeau best for her performances in The Fog, Escape From New York, Creepshow, Swamp Thing, Back to School, and Cannonball Run. She appeared in the Academy Award winning ARGO, and will soon be seen in  Death House, The Chain, Apple Seed, The Eagle and the Albatross, and Exorcism at 60,000 Feet.

Adrienne has a Golden Globe nomination and over 450 screen performances to her credit. She starred as Ruthie, the Snake Dancer, on HBO’s Carnivale. She was Oswald’s mom on Drew Carey, Victoria Grayson’s mom on Revenge, and Venus’s mom on Sons of Anarchy. Daytime viewers know her as Suzanne Stanwyck on General Hospital. Her recent television appearances include Criminal Minds, Grey’s Anatomy, and the Hulu series Dimension404.

Having starred in over 25 theatrical productions in the U.S. and Canada, Adrienne spent most of 2015 playing Berthe, Pippin’s grandmother, in the National Tour of Pippin, singing “No Time At All” as she hung upside down from a trapeze.

Off camera, Adrienne is the voice of Catwoman in Batman: The Animated Series, Ms. Simone in Scooby-Doo on Zombie Island and Scooter’s Mom in the 3-D animated film Fly Me To The Moon. She can be heard in a myriad of video games, God of War and Halo 4 among them.

Adrienne is the author of four books: the best-selling memoir There Are Worse Things I Could Do; the comedic thriller Vampyres of Hollywood and its comedy romance sequels Love Bites and Make Me Dead.  The screenplay of Love Bites, which she co-wrote with Death House director Harrison Smith, should be coming to the big screen in 2018.

Adrienne Barbeau will be appearing both days.